Contextual Analysis of Pride of Baghdad

Pride of Baghdad is a graphic novel that highlights the story of a pride of lions that escape from the Baghdad zoo in search of survival. According to Martin and Steuter (2010), this happens during the American bombing of Baghdad in 2003, and the lions’ struggle for liberation and survival. Their escape from the zoo is perceived as liberation from the gory scenes of war all over the country. The novel gives a true reflection of the devastating effects of war and attacks on countries. It specifically comments on the effects of war on civilians and the essence of freedom/liberation to civilians by means of animal characters. Accordingly, the novel is based on the history of the American attack on Iraq and the sufferings that civilians had to undergo.

Page 27 of the novel is the most important page in this book because it gives a true reflection of the war and the aftermath on civilians. The page reflects on the destruction caused by the war and the ultimate sigh of relief that comes with freedom for civilians, as was the case in Baghdad. This essay explicates the significance of page 27 to the implicit arguments of Pride of Baghdad, its historical context, and the respective time.

Firstly, page 27 is the most significant page of the novel because of its effective use of rhetorical appeals. The key rhetorical appeal used at this page is pathos where readers get the emotional feeling of freedom. This is in line with the articulation of the whole book where liberation is viewed as one of the most elusive things that come with relief to individuals. In line with the views of Martin and Steuter (2010), the page gives a real emotional feeling to the reader, especially when the lions realize that they are finally free after a long period of being locked up in the zoo. Additionally, ethos is sufficiently utilized to portray the ethical standards of the author in addressing warfare and the rights of the victims. The author is extremely sensitive when talking about the plight of the affected, as reflected in the condition of lions seeking for their liberation. Logos is exhibited in the logical sense in which the whole argument is developed. The author presents a logical argument that warfare might start from a small event and lead to untold destruction, but the ultimate best price for civilians would be freedom. The lions seem overwhelmed by the event of being free and do not believe it. The destruction of the zoo wall does not limit their ability to express their happiness, and they tend to share this with others. The use of pathos in the page is effective because it captures the emotions of everyone including children and adults, women and men in the pride of lions. The pathos used in the whole book examines the emotional connection that comes with a long struggle and the happiness that follows. Emotional appeal is one of the best ways to reach out to readers, and this page does this in the best possible way, thus keeping the reader focused on completing the rest of the story.

Secondly, page 27 is the most relevant page in reflecting the importance of the time captured in the rest of the book. It is worth noting that Pride of Baghdad talks about the events of 2003 when America attacked Iraq with the view of fighting off terrorism. During this time, civilians, most of whom were innocent, experienced untold suffering with the destruction of their houses and other buildings in the country. Vaughan and Henrichon (2008) agree that most civilians lived in desperate conditions and carried out an unending search for liberation. In this page, this time is effectively captured with the illustration of a destroyed wall that sets the lions free from the zoo. There is a scary period when one of them gets the feeling of death. Martin and Steuter (2010) note that the illustrations used on the page give a true picture of the events that happened during the 2003 bombing on Baghdad as there was a massive destruction of both buildings and people. For instance, the photo below illustrates the nature of this time as captured in the rest of the book. It was not easy for civilians in Iraq, as they tended to lose everything. However, the most important thing at this time was not the loss of buildings, but the gain of freedom, as seen in the picture below. The lions appear to have lost their residence, but have managed to gain the long-awaited freedom, which gives them the ultimate relief and a feeling of hope in their hearts. At that time, they had a feeling that they need to move forward after the attainment of this freedom. 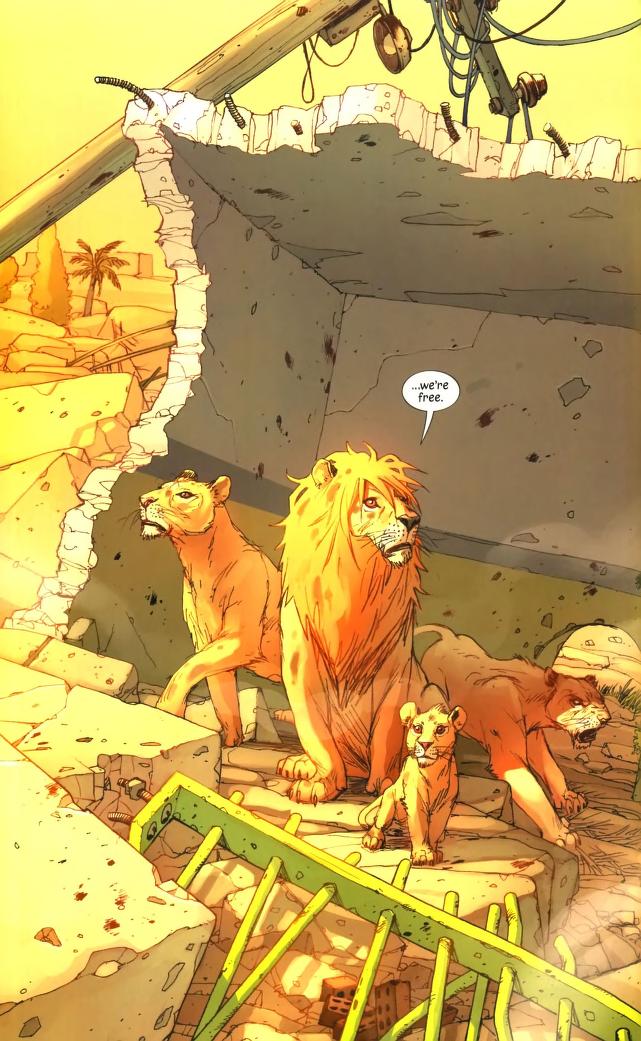 (Caption: The photo from the book illustrates the destruction that has taken place, but also appreciates the significance of freedom)

Thirdly, the book argues that Baghdad became a place where civilians care about each other. During the American attack on Iraq, the main city had become the place where individuals care about the welfare of others. As argued in the entire book, the aspect of place is significant because it offers a sense of a perfect city where everyone is able to consider the welfare of others. The fight for freedom or survival is not an individual affair within this place. Vaughan and Henrichon (2008) argue that the spirit of survival and freedom is a communal thing, as it was in Iraq in 2003 because residents tried to find their way out of the situation. Page 27 is vital for the discussion of the significance of place and the sense of care exhibited by every member of the community. For instance, one of the lions asks if everyone is ready when the most difficult time, apparently the attack, comes around. The darkness, which is expressed in the form of attacks in the rest of the book, is shown on this page in the form of dust that covers everything. However, page 27 still appreciates the significance of this place as one where, despite the difficult times, care is the order of the day. With this care, the march toward liberation is easier and timelier, as was with the residents of Baghdad. In fact, page 27 tends to bring out the view that a place where there is care and understanding is the best place to prosper and attain the desired goals. The photo below illustrates the care exhibited in this place and its role in catalyzing freedom for its people. The whole concept of place is clearly brought out on this page, as emphasized in the rest of the book. The need for peace and accommodation within the place is fully explicated and discussed on this page. 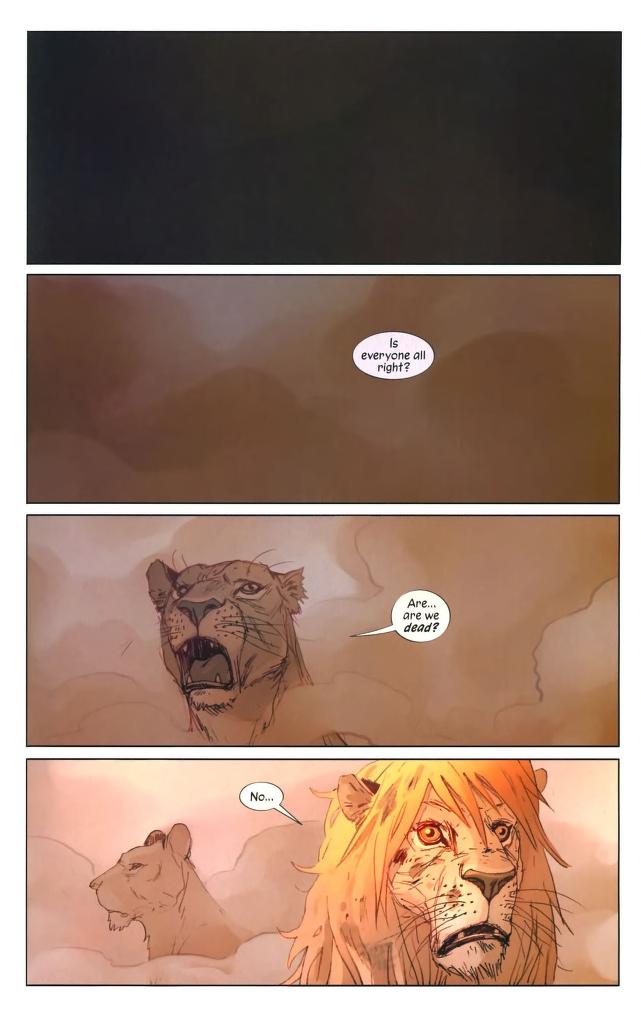 (Caption: The illustration from page 27 indicates the place where care is the order of the day despite the difficult times during the war)

Additionally, page 27 is the most reliable page when talking about the argument made in the rest of the book and the outcome of such events. The argument made in the book is that warfare is one of the most destructive things that could happen in the life of a person. The rest of the book argues that warfare is associated with the worst events in the life of individuals. Martin and Steuter (2010) observe that the book talks about the frustrations that come during the time of warfare or attacks, especially on defenseless people. They never have an ability to make their case heard by anyone. However, they try their best to get a way out of these difficult times. The overall argument is that giving up is not the best option. Individuals have to be in a constant push toward what they want despite the difficult times. On page 27, a similar view is reflected, hence making it the most interesting and reliable page in relation to the rest of the book. For instance, it illustrates massive suffering with the rising dust and the turbulence near the zoo, but the lions remain determined to reach the ultimate goal, freedom. The rest of the book proves that the whole idea of warfare is extremely discouraging and devastating in different capacities. Nevertheless, Vaughan and Henrichon (2008) hold the view that courage is the best way to reach to the ultimate goal of freedom. At first, things do not work out in the best way during the turbulence, but the situation stabilizes at the end when the wall falls. This page echoes the overall point in the book that warfare is the worst thing, but what matters is how people are able to come out of it.

In conclusion, Pride of Baghdad presents a plight of four lions that get their freedom after being locked up in the zoo for a long period. Page 27 is the best in terms of explaining the historical context of the entire book in relation to time, place, and the entire argument made in the book. Apart from the effective use of pathos to illustrate the relief from obtaining freedom, page 27 plays an instrumental role in illustrating the real picture of the 2003 American attack on Iraq that aimed at fighting against terrorism. The most affected individuals in this fight were innocent civilians who had no way to run away from the war. Moreover, it gives the feeling of a place where people try to think of each other despite the difficult times. They recognize that they are united in their sufferings and have to protect the interests of one another. Overall, page 27 reinforces the discussion in the entire book that living in warfare is not easy, and one feels rejuvenated only when he or she achieves freedom.