Article “The Caste System in India” written by Lauren Thomas and provided on educational portal About.com introduces the reader into the society that has been divided into castes for over three thousand years. The caste system is peculiar to Hinduism, the religion of over 80% of the population of India. There are four castes (varnas) that are further subdivided into over two thousand sub-castes (jatis). The categorization is rigid and impossible to change during one’s life; only after death, one can be born into another caste. The four castes are Brahmans, Kshatriyas, Vaishyas, and Shudras; the largest group that stands under the class system is Dalits or the Untouchables. The author informs that although the caste system penetrates all spheres in the society, today it is no longer as imperative as even a hundred years ago.

The roots of the caste system lie in Hinduism. According to the legend, the primal man sacrificed himself to create new people. The Brahmans were created from his head, the Kshatriyas were created from his arms, the Vaishyas were made from his thighs, and Shudras were formed out of his feet (Thomas). The legend reflects the hierarchy and the purpose of the castes. Belonging to one or another caste determines the person’s access to wealth and power. The Brahmans are the highest caste. In addition, it is the richest and the most powerful caste even today. The Kshatriyas come next, together with the Brahmans they form a ruling class, but the Brahmans are still superior because they have an access to the higher wisdom. Then come the Vaishyas; though they belong to the so-called “twice born,” they do not occupy any important position in the social hierarchy. Even if some Vaishyas become wealthy through trade, they do not achieve a higher social status. The lowest caste is the Shudras; they are denied any privileges, cannot read the Vedas, enter temples, or recite mantras (Deshpande). 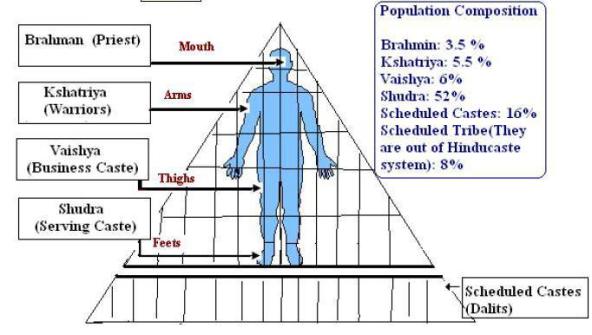 The representatives of different castes are considered to have different qualities depending on the part of the primal man, from which they emerged. The Brahmans are associated with wisdom, calmness, self-control, and austerity. The Kshatriyas are considered to be strong, brave, alert, generous, disciplined, and modest (Deshpande). The Vaishyas are good at mathematics and crafts but are considered incapable without higher castes. The Shudras were denied any specific abilities as they were primarily servants and slaves (Deshpande).

The castes influence the choice of professions, or, more correctly, determine them. Within the castes, professions are restricted to jatis (sub-castes). Thus, Brahmans serve as priests and teachers; they can study, interpret and teach the sacred texts like the Vedas and the Puranas. The Kshatriyas are political leaders, rulers, soldiers, and rich landowners; hence their responsibilities are ruling and protecting. The Vaishyas are traders, merchants, and craftsmen; their task is business and economy. The Shudras are servants or tenant farmers. Originally, the Shudras performed impure work for the upper castes. As they progressed to being farmers, a vast under-caste of the Dalits developed to deal with impurities (Thomas). 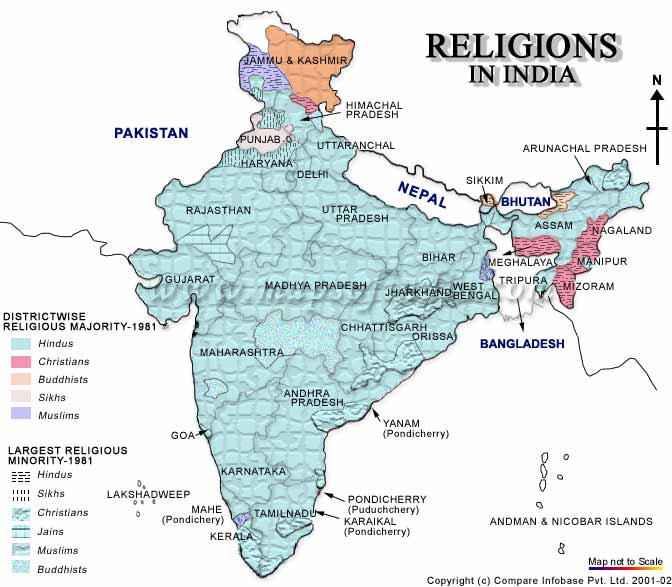 Map of religions in India.

Hinduism links spiritual and physical purity. There are many restrictions concerning food, drinks, occupations and social contacts. The higher castes may not do things that are impure for them. That is why there is a huge declassed group of the Untouchables who perform various dirty works, such as sweeping the streets, cleaning sewage, killing pests, working with dead bodies etc.

The Untouchables are denied any place in the caste system as well as in the social life. They could not be a part of community; they had the right to settle only outside the villages, could not use the village well, and use the same places and paths with the caste people. Even their very presence was considered polluting. For instance, entering a temple and listening to the sacred texts by the untouchable was a criminal offence (Deshpande). Consequently, the Dalits, although the largest group, is also the most deprived, uneducated, and poor. 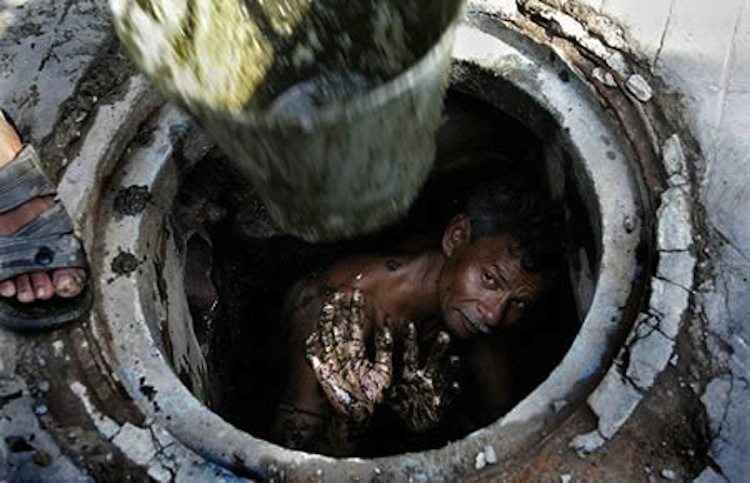 A Dalit man works in a sewer in Mumbai.

The caste system implies that a person is born with a certain set of features and on its place; it is impossible to be promoted from a lower position to a higher one. On the opposite, if a person becomes an outcast in his own caste, he can become untouchable. For example, Mahatma Gandhi was announced untouchable for the period of his stay in England because he went there without the Brahmans’ approval (Deshpande). Hinduism teaches that if a person lives a righteous life, he/she can be born to a higher caste in the soul’s next incarnation. Similarly, if one is born into a lower caste or as a Dalit, he deserves it because of his sins in the previous incarnation.

In the previous times, the only way to overcome the caste limitations was conversion to Buddhism. The founder of Buddhism belonged to the caste of Kshatriyas, and he strongly advocated against caste distinctions. However, in the 13th century, the initial Buddhism in India was replaced by its tantric branch that incorporated much of the Hinduism (Deshpande). Later, Christian missionaries neglected caste distinctions and educated the Shudras and the Untouchables. Although they envisaged their conversion into Christianity, education had an uplifting power (Thekaekara). In the 19th century, Mahatma Gandhi, who came out of the Vaishyas, became an advocate for abolition of the caste system. He called the Untouchables Harijanas, “the children of God.”

After 1945, Indian Constitution adopted a range of laws that convert India into a democratic society. For instance, a crucial “Law on Scheduled Castes and Scheduled Tribes” protects the previously deprived groups of population. Three groups that fall under this law are the Dalits (“scheduled castes”), indigenous tribes (“scheduled tribes”), and “other backward classes” (Deshpande). The Indian Constitution announced caste discrimination illegal. Affirmative action grants quotas in parliament and government institutions, as well as in higher educational establishments, to the formerly backward groups.

While the Dalits receive equal rights, access to education and law-making, there is still a long way to real equality. Caste distinctions are so pervasive that it is impossible to get rid of them at once. Caste-based oppression takes different forms, such as rape, assault, intimidation, etc. Though the Dalits form a powerful political group, the higher castes are not eager to share power and form a considerable opposition to the implementation of the democratic laws. 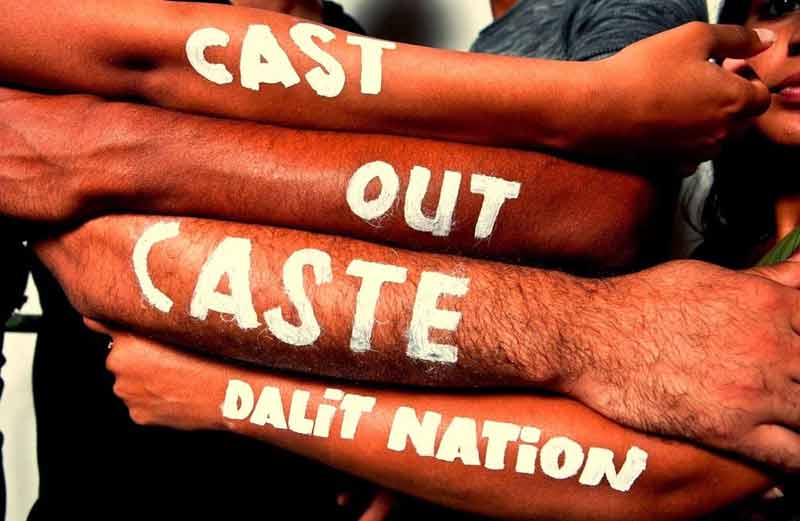 In everyday life, caste distinctions are not as obvious as they were earlier, and many rules vanished. For example, sharing food, eating at restaurants and cafés, choosing professions, or owning land are not caste-restricted anymore. At the same time, the untouchables are not welcome at most public places even today, and many cafés have a “double glass system” that implies separate glasses and utensils for the Dalits (Thekaekara). Marriages between castes are not approved though they have become more common. Social survey of 2005 showed that only 11% of Indian women married outside their caste (A.R.). Caste segregation is sharper in rural regions where it is supported by local elders and chiefs. The state of Haryana became notorious for murders of young people, who dared to come out of the limits imposed by their caste (A. R.). In 1994, in the state of Bihar, higher-caste landowners hired a private army for protection from the alleged danger; this illegal army, Ranvir Sena, committed 20 massacres between 1994 and 1999 (Deshpande)

Nowadays, caste division seems to be obsolete, illogical, and incompatible with the country’s course on rapid development. Indeed, in modern conditions, caste distinctions are not so accurately observed than a few decades earlier. Access to education, government quotas, and increasing political influence facilitate socioeconomic mobility of the Dalits and the Shudras. Nevertheless, caste segregation remains in many spheres of life though declared illegal.