The issue of rapid animal extinction is the sore subject of our time. In order to protect the big apes, the Mountain Gorilla Conservation Fund (MGCF) has been instituted. Its core objective is to preserve the highly endangered animals living in Central Africa and parts of Uganda and Rwanda. In an effort to preserve the gorillas, the MGCF has taken a proactive initiative to start up projects aimed at saving few species for the other generations to enjoy the animal diversity (Cranfield & Lowenstine, 2010). Their aim has been fostered by close cooperation with the local residents, partnering with other conservative agencies and getting support from the community development initiatives. Involving the locals in the whole conservation process requires building a good rapport with them. This has remarkably reduced the incidences of poaching and destruction of natural habitats where the animals live.

The MGCF has also collaborated with the local leaders in order to draw attention of the community to the significance of preservation of the natural habitat and maintaining the ecosystem in its original state. This was done to promote a peaceful co-existence between the local residents and the mountain gorillas living in the same area without having conflicts of interest (Cranfield & Lowenstine, 2010).

The aspect of partnering with other wildlife conservative agencies and like-minded organizations enables MGCF to get a sufficient support needed to actualize its projects. They are aimed at safeguarding the territories of animal habitat and guarantee their survival despite the various challenges. Owing to the valuable assistance, the organization has established zoning in some areas where humans are not allowed to settle and cleared the vegetation in an effort to protect the gorillas.

Scientific research on these species of animals has demonstrated that they are highly susceptible to diseases such as Ebola hemorrhagic fever and other human related illnesses. For this reason, it is important for the mountain gorillas to be carefully monitored by veterinary doctors and other animal specialists in order to eradicate the incidence of disease among the population. It has also been noted that human encroachment has substantially increased the number of sickness cases among the species. The MGCF has been monitoring the population and carry out surveillance with medical doctors to assess the health and wellbeing of the gorillas. Those that appear sick and unstable are quarantined and sufficiently attended before being released back to the wild. As it was mentioned before, the mountain gorillas of Congo and Gabon are largely affected by zoonotic diseases of humans such as Ebola and scabies (Cranfield & Lowenstine, 2010). For instance, the population of the apes was found to decrease concurrently with the outbreak of human diseases. The examination of the carcasses showed positive tests for Ebola confirming the fact that gorillas are susceptible to human diseases. This report made it imperative for the human population to be distant from the animal habitat in order to reduce the spread of diseases (Cranfield & Lowenstine, 2010).

Human activities such as poaching, mining, deforestation, and settlement have been the biggest challenge to the conservation groups. They are a major threat to the survival of the species though there are harsh penalties and stringent laws against such actions. Organizations and groups on conservation of wildlife have been lobbying for strict legislative laws against poachers and trespassers in order to curb the menace and preserve endangered species. The local residents used to be fond hunting gorillas for meat that largely affected the population number. Over the decades, the intervention of the Mountain Gorilla Conservation Funds and other related groups have brought poaching to zero level in the highly guarded areas of Virunga Conservation zone.

Other activities such as mining prospects in DRC essentially disrupt the original habitat and hence affect the gorilla population. The destruction of the natural surroundings exposes the gorillas to changing their usual environment that negatively impacts the population and reduces their numbers remarkably. Mining coltan in Kahuzi-Biega National Park has led to a drastic decline in gorilla population as a result of the noise pollution and habitat modification (Begley, et al., 2007). The MGCF has been on the watch to regulate such activities trying to protect the degradation of the environment and disruption of the ecosystem.

Habitat loss and modification largely influenced the survival of the gorillas owing to the fact that recent human activities have encroached into their environment, hence displacing them. Statistics says that only 20% of the gorillas live on the protected territories in the unaltered ecosystem and are safe from the extermination while the remaining 80% are in grave danger (Harcourt, 2013). Mountain gorillas are however, protected. As it was documented in the census of 2011, only about 900 mountain gorillas were left in the wild due to the rampant deforestation and the ever-growing human population. The forest where the apes lived was fertile and high in biodiversity that attracted people who later banished the animals (Begley, et al., 2007).

The over increasing human population in the African countries has largely curtailed the efforts of the conservative groups in protecting the natural habitats from the encroachment. The population is continuously increasing, and the land available for settlement is growing smaller. The residents are forced to clear forest cover for settlement and agriculture purposes. This has largely modified the natural habitats and significantly reduced biodiversity in the general ecosystem. This situation has piled pressure on the conservative groups such as MGCF who cannot stop the intrusion of the human population into the forests where mountain gorillas live. Hence, the animals are slowly displaced regardless of the initiatives set forth to protect the areas from settlement. The ever-increasing problem of food shortage has further complicated the plan as people seek fertile grounds for cultivation. This has resulted in deforestation and clearance of vast areas of vegetation. It is evident that local people have come to appreciate mountain gorillas and understand the importance of saving them, but logically, their survival comes first. That is why they will do anything to provide themselves with shelter and food. This has posed a major challenge and setback in the whole conservation process.

Economic value has to be attached to the gorillas so that the local people may realize their significance to the community and the country as a whole. This is important in an effort to curb residents from pursuing the animals for meat. Educating the population lies in ensuring them to appreciate the wild life and become actively involved in the conservation projects. World aid and development companies ought to take part in the initiative by funding other organizations such as Mountain Gorilla Conservation Fund in order to spearhead these programs. It is also important to empower them to have sufficient resources needed to safeguard the endangered species from exploitation and eventual extinction. The governments of the Democratic Republic of Congo, Rwanda and Uganda need to be on the front line in fostering for conservation measures and put in place policies that protect big apes and promote conservative programs and initiatives. The authorities should support groups and associations aimed at protecting wild life and creating a harmonious understanding between people and animals (Scull et al., 2012).

In order to effectively conserve the gorilla population and guarantee sustainability for their population, it is essential to seek a support from the public domain. The Mountain Gorilla Conservative Fund will only achieve their mandate when they get enough assistance from the public domain. The organization has many projects and programs that need to be carried out. They mostly rely on grants and donations, so when the funding goes down their activities also get slow. It is imperative for the locals to understand the intrinsic value that comes with the conservation measures. It is also important to promote local tourism as the international tourists will come to have a glimpse on these noble apes. It is hence important for the public and private sectors, as well as to the general public domain, to assist in raising funds for the MGCF. It should be done in order to run the programs that guarantee conservation of the species and their growth in number to self-sustaining levels that will live to future generations (Begley, et al., 2007).

It is important to note that the MGCF has played an instrumental role in an effort to ensure effective conservation of the mountain gorillas over the years. It has worked with people in the various national parks and in the wild to ensure that the big apes increase in number. Under the leadership of Ruth Keesling, the population of the mountain gorillas has grown from 248 in 1987 to 880 today, living in the wild courtesy of the Mountain Gorilla Conservation Fund. This is a clear show of the great initiative funded by the organization. 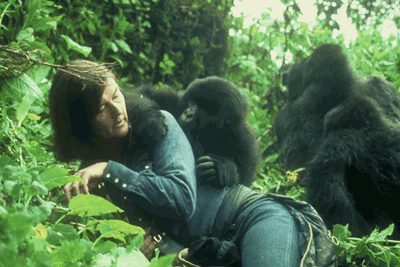