The advertisement industry is unthinkable without some sort of manipulation. In fact, the more subtle message advertisers place in the ad, the better their work is considered to be. Consequently, people can develop a rather hostile attitude towards advertisements in general. Nevertheless, not all commercials try to force people to purchase something and benefit certain firms. Sometimes, the message is hidden, and the company tries to evoke positive associations with the brand indirectly. Jeep is one of the corporations that employ this strategy. Its cars appeal to the pleasure of driving and to the free spirit. Gary Topolewky, a chief creative officer of BBDO advertising agency, put it the following way, “It is all personality. Cars are an emotional purchase. Bottom line, you want to feel good about the car you are driving” (Jeep Campaign, 2008). If the company aims at emotional appeal, it does not have to prove its products are of the highest quality. It can make a favorable impression by evoking an affirmative emotional response from the target audience. A vivid example of such campaign is the Jeep advertisement poster dedicated to the Earth day produced last year. The message of this ad is simple – people should care about their environment. Jeep Company decided to choose simple design, symbolic colors and a catchy slogan not only to raise the awareness of the environment protection but also to make a favorable impression on its customers and earn their trust in an indirect way.

To start with, the graphic design of the advertisement works for the favorable brand perception. The image involves simple image displaying a Jeep falling from the earth. The car is a significant visual object of the advertisement. It strikes the eye of the viewer immediately. The layout design demonstrates the movement; thus, the car is in motion.

It is obvious that the image is well designed with regard to colors, as well. Henceforth, they have a profound impact on the perception of the picture in the advertisement industry. For the image, designers have used only three colors. These are green, black and white. Green color usually evokes positive associations, and the brand decided to make a benefit from it. The entire background of the picture is green. It is a predictable choice for an environmental campaign. Green evokes associations with life, nature, environment and safety. Choice of this color creates the necessary context for the message of the campaign. At the same time, the ad uses contrasting colors, which are the key to the readability of the image. In particular, the car and the Earth are in black color. It is meant to make a contrast to the green background. As falling Jeep and polluted Earth reflect something negative, white color represents something positive. In the given case, it reflects the name of the brand and the tagline “If there is no planet, where will you drive?” Contrasting colors do not only increase the readability of the image but also make the advertisement bright and eye-catching. Besides, the text is in the left corner, which attracts people to read it.

A catchy slogan also works for the positive image of the brand. The advertisers did not go far as to make up something sophisticated and original. Instead, they make people think over the matter of safe life. The question “If there is no planet, where will you drive?” works effectively in several directions. First, it points to the global problem of environment protection. People should think about the consequences of their consumption and pollution today as it contributes to the quality and safety of their life in the future. It is true that if humanity undergoes self-destruction, nobody would care about the cars. In consequence, the first direction is the preservation of the environment.

Second, this question appeals to the egoistic motives of the customers. Owning the car is often the matter of the prestige. People buy vehicles to demonstrate their social status, respectability and wealth. If there is nowhere to drive, they will not be able to show others their expensive cars. This hidden message is the one that the rich customers would not like. It appeals to their conceit. Third, the question works together with the image of falling car. The Jeep Company has always presented its vehicles as able to go anywhere including places where there are no asphalted roads. Thus, it is nearly impossible Jeep cars can fall anywhere. This ad sends a message that the only thing that can inhibit the movement of Jeep vehicles is the absence of any surface to ride on. Thus, it indirectly tells the audience that the brand products are of the great quality and reliability. Nothing but the Earth collapse can prevent Jeep cars from functioning well.

What makes the advertisement work is the use of indirect positive assessment. The brand’s marketing specialists did their best to divert the attention of the customers from the urge to buy cars. The “red herring” of the advertisement is one more message on the poster. It goes the following way, “Jeep encourages you to guard the wonderful place we live in, so that we can continue to enjoy nature, the beautiful views and all the good that the world is offering us.” This phrase seems to be an answer to the question to some extent. It makes people value the environment more and think of selling cars less. There is nothing about the benefits of the cars in this advertisement. However, it creates the favorable impression of the brand as it seems to be caring about the world. Positive emotions associated with the company are likely to define future purchasing decisions of the customers. Emotional memory can be a powerful stimulus in buying preferences. That is what the company counts for when making this type of advertisement.

Jeep Company decided to produce this poster right before the Earth day on purpose. This decision is not surprising as many contemporary businesses have their sustainability strategies. It is a clever move because this way the company demonstrates its support for environmental protection. Care about the environment and ecology benefits the image of the corporation. When people know that certain companies do some things for the common welfare and society, they develop a positive perception of those brands. If Jeep Company raises awareness of the ecological responsibility, the public tends to forget that it pollutes the air with its cars’ exhausted gas. Thus, the customers concentrate on the positive instead of the negative. Additionally, pro-environmental campaigns allow companies to expand their target audience. Even if not all people buy Jeep cars, all of them care about the environment. The target audience of the given brand consists of rich people, mostly men. At the same time, sustainability strategy is appealing to both men and women in spite of their social class. Hence, an environmental poster was created on purpose. It benefits the company in several ways.

To conclude, the advertisers of the Jeep Company did the good job. They managed to create an efficient mix of simple design, symbolic colors and a catchy slogan in one modest poster. They chose the simplicity and original approach and that became the huge benefit of the advertisement. By doing so, the advertisers achieved several goals at the same time. It allowed them not only to draw the attention to the environment protection, but also to create positive associations with the brand without asking about it. Success of this advertisement says a lot about us as individuals, consumers, and as a society. It shows how good marketing agents are approaching the basic needs of the society. Humanity needs the safe environment for long and happy life.

People want safe environment for themselves and their children. The advertisers of Jeep ask a good question of what will happen if people lose their safety. The potential consequences may seem horrible in the human imagination. It shows how vulnerable people are when someone appeals to their best intentions. The customers fall prey to the delusion of sharing the same values with the brand. They think that even great corporation supports them in making better future for their children. Up until now, the hidden message of the advertisement is that Jeep Company is both caring about the world and has reliable cars. As a result, the only purpose of the environmental campaign is influencing people to make the choices Jeep Corporation needs. 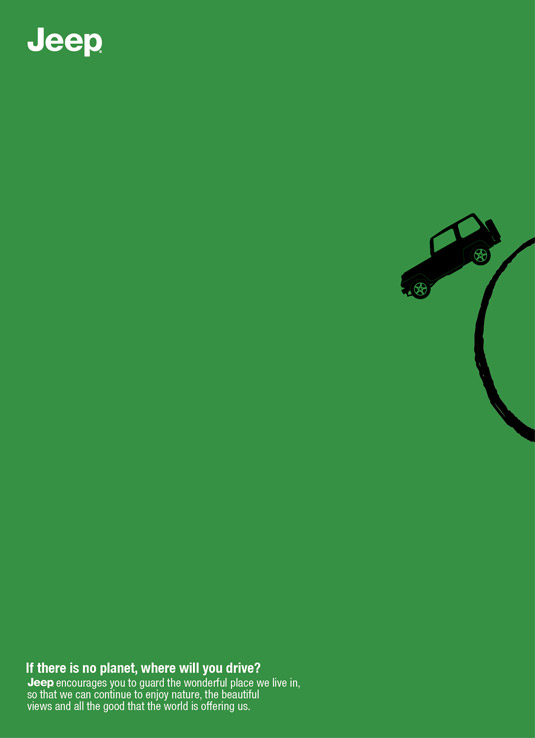